I have to admit that I felt some apprehension about writing this article. The issue of vaccination is contentious; it’s difficult to find a parent or health care professional with an unbiased opinion regarding immunization. That said, I thought I’d tackle one of the simpler vaccines in that the decision to immunize or not might be more straightforward compared to the others that are available: Chicken Pox.
Much of my work is focused on prenatal care, labour and delivery support and of course the little ones that come after. When the time comes to make a decision about immunizations, confused parents often reach out for help in hopes of gaining some clarity on the issue, a task made increasingly difficult by intensely opposing views and an overwhelming body of information. When it comes to chickenpox however, parents often feel that this is a ‘no brainer’ given that most of us have had chickenpox as children without consequence. Perhaps this is what accounts for its low vaccination rate: 32% on average. However, it might be worth taking a look at what prompted the development of the vaccine just so that we can be assured that it really is a ‘no-brainer’. We’ll briefly look at its clinical presentation and course, populations affected and potential complications. In the end, I hope to offer what are clear and comprehensive criteria for vaccination of chickenpox.

The Chicken Pox, borne of the varicella-zoster virus (VZV), is a highly contagious (infection rates exceeding 90%) rash characterized by its blister-like appearance and intense itching. Its peak occurrence is in children aged 4-10 years with more complications associated with increasing age. In both age groups, the rash usually affects the head and torso with limited blisters found on the extremities. Transmission of the virus is airborne with an incubation period of 10-21 days. People infected with the virus, however, are only contagious for the 2 days prior to the appearance of the rash and until all blisters have healed over, a process that usually takes about 6 days. In children, often the only indication that they have contracted the virus is the rash itself whereas adults will usually suffer from nausea, diminished appetite, aching muscles, a low-grade fever and a general feeling of malaise a few days prior to the outbreak. Adults, particularly males, are at risk of developing serious complications such as varicella pneumonia (90% of varicella pneumonia occur in adults), hepatitis and encephalitis although these are rare. In children, the most common complication is infection arising from scratching itchy pox. 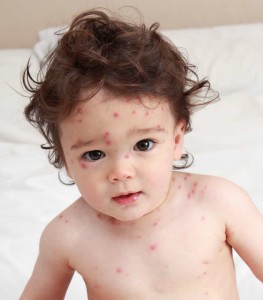 Another common complication (regardless of the age at which you were infected) is shingles an exquisitely painful condition where the virus, having been dormant for decades, reappears and affects the superficial nerves supplying the skin. Pregnant, non-immunized women who contract the virus prior to 28 weeks can pass the virus onto their unborn child posing very serious consequences that include birth defects among others. After 28 weeks the risk is premature delivery, after which the baby is at risk for developing the infection if exposed 7 days prior to birth or 7 days after birth. Non-immunized pregnant women are also at risk of developing pneumonia with the severity increasing with increasing gestation. This is also relatively infrequent as only 10% of non-immunized pregnant women with chickenpox will go onto develop pneumonia. People that are immunocompromised have it the worst in that the infection can be potentially fatal as this population tends to manifest the most serious complications associated with the virus.

Given the potential consequences to adults, neonates, non-immune pregnant women, and immunocompromised patients (eg: HIV), not to mention that it’s responsible for a third of all strokes in children (2.03 strokes per 100,000 Canadian children under 19 years of age. Make that even less when you consider we’re talking about kids ages 4-10) it’s no wonder that companies sought to limit the occurrence and severity of this infection. Limit the number of infections and you reduce the number of complications overall, right? Not quite. There are a few important factors to consider when deciding whether or not the virus is the right choice for you and your family. I was surprised to find out that the manifestation of VZV changes depending on your climate. In temperate zones, VZV will have the clinical presentation and course that we are familiar with; a self-limiting rash affecting primarily kids aged 4-10 years. However, in tropical countries, the virus rarely affects children and typically saddles adults with a more severe form of infection and associated complications. Next, is the vaccine itself in that it does not confer lifelong immunity (needs a booster after 5 years), whereas natural infection does. The vaccine also loses efficacy at a rate of 3% annually, with the duration of protection from the virus being unknown. What this means is that while the vaccine may protect children during the age range of least vulnerability to severe consequences of the virus, adults who were vaccinated as children and therefore never contracted the virus naturally renew their susceptibility to the infection and its complications. The risk of shifting the affected population of chickenpox to more vulnerable cohorts must be carefully considered against the generally benign nature of the naturally occurring illness.

Well, I guess if you were one of the 10% of children who hadn’t contracted the virus by the time you reached 15 years old lived in a tropical country, had a compromised immune system, were a caregiver to someone who could not get vaccinated and hadn’t had the infection yourself then this might be the best solution for you. And certainly, very special consideration needs to be taken if you are a non immunized pregnant woman or have a baby less than 6 months of age. However, if you are a parent struggling with whether or not to vaccinate against this particular virus in your healthy and well-nourished child you might want to give some thought as to whether or not this might be a vaccine you can do without given that 75% of kids will get chickenpox by the time they are 15. With the benefit of lifelong natural immunity the issue of contracting the virus while pregnant ceases to be an issue in addition to reducing the serious consequences associated with infection at an older age. My advice as both a parent and physician: If you hear of a child in your community with the chickenpox, invite yourself over and enjoy a chickenpox party! Your healthy but itchy toddler/child will be protected FOR LIFE!