When women seek out care for their hormones, they are usually not naming insulin as their main suspicion. However this hormone can be a key contributor for many hormonal ailments including polycystic ovarian syndrome (PCOS), weight loss resistance and fibroids and heavy bleeding. Read below to figure out why you need insulin, what happens when you have too much and how to know where you land on this spectrum!

Like any other hormone in the body, insulin is required for both men and women’s health where it functions predominantly in blood sugar regulation; insulin takes glucose out of the bloodstream and into the cell where it is used to make energy. Also like other hormones, when you have too much of it in your body, it can begin to cause problems. One of the main concerns is the development of insulin resistance. This occurs when the body has too much insulin and subsequently it learns how to ignore it. In other words, insulin resistance is the condition of having chronically elevated levels of insulin in the body. It is also referred to as prediabetes, hyperinsulinemia or metabolic syndrome.

Insulin is an anabolic hormone which means that it likes to build things such as muscle tissue. For females, insulin plays a role in building the endometrial lining of the uterus through its ability to convert to estrone (one of three estrogens that females have in their bodies). Estrogen is what builds the lining of the uterus. How I often describe this to patients is this: Estrogen lays the bricks, progesterone is the mortar that keeps the bricks in place. Thus, insulin is actually required to have a normal menstrual cycle. However, if you have too much insulin, and therefore too much estrone, the lining of the uterus can become too thick and, as a result, conditions such as heavy periods, fibroids, endometriosis and adenomyosis can develop. It is also important to note that insulin can fuel inflammation which contributes to painful periods and pain conditions such as endometriosis.

How do I know if my insulin response is doing something funky?

Some other signs and symptoms that you may have insulin resistance include the following:

*Please note that it is entirely possible to have increased insulin without weight gain.

Can I test my insulin?

Yes, of course! There are three main ways to test insulin:

FYI: There are many different pathways to develop PCOS. Join my webinar to learn about them all! Sign up here. 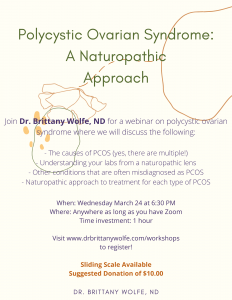