A Case of Juvenile Idiopathic Arthritis AKA Juvenile Rheumatoid Arthritis.

When I think of two years old, a vision of the Merry Melodies Tasmanian Devil comes to mind: A screaming whirlwind of dust levelling everything in its path or in the case of my own children, launching themselves off the couch and flushing my watch down the toilet along with a whole roll of toilet paper. The last thing I would imagine would be a child cautious about moving too fast because their joints were hot and swollen, or having to take breaks several times throughout the day to recharge because it takes so much to work through the discomfort and stiffness of juvenile idiopathic arthritis (JIA). Yet this was exactly the case when I met little Katie in August of last year. Her parents had noticed that her big toe was quite swollen and didn’t seem to be going away on its own. Two weeks later her parents noticed that Katie would move carefully in the morning and take her time initiating movement. To them, it seemed as she was moving like someone sore and stiff. A week after that her knees became involved; they were swollen and warm to touch. Her mother, a registered nurse, promptly took her daughter to the doctor and did some preliminary bloodwork. The results showed that inflammation was present but did not point to a cause. Treatment options at the time were to prescribe Naproxen (a non-steroidal anti-inflammatory or NSAID associated with bleeding in the digestive tract), to do cortisone shots in the affected joints which, with repeated use, degrades connective tissue and lastly to prescribe prednisone, a steroid drug associated with several damaging side effects. The parents opted for the naproxen with the intention of buying a little time before the other treatments become necessary. At this point, they came to our clinic looking for ways to augment her treatment given that, despite the naproxen, the number of joints involved was growing. 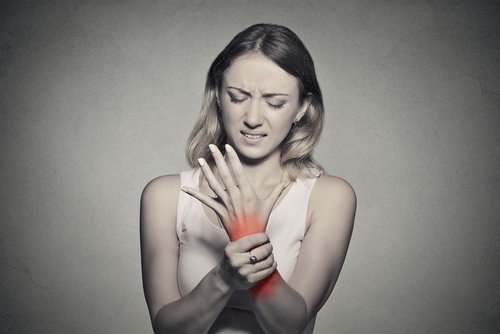 It’s important to understand the prognosis of kids with JIA/JRA as these children are at increased risk for the
involvement of other organ systems, have mobility issues stemming from chronic inflammation and potential joint deformities. Conventional treatment is ‘comprehensive’ in that it involves pharmacotherapy, physical therapy, academic counselling, occupational therapy and psychological counselling. For kids with more than one joint involved complete remission is rare. Although Katie’s parents were absolutely prepared to do whatever was required of them they couldn’t help but wonder if there wasn’t something that was being overlooked.

Up until Katie, I had never treated anyone with JIA/JRA but as naturopaths, we routinely treat multiple manifestations of autoimmune disease of which JIA/JRA is one. The working naturopathic theory behind autoimmunity is one that I am sure you’ve heard of before although perhaps in different contexts. Leaky gut syndrome or gastrointestinal permeability is a process by which material from the cavity of the intestines enters into the bloodstream through the tissue wall before it’s intended to. Once in the bloodstream, the regional lymphatic tissue, correctly recognizing it as foreign, begins making an abundance of antibodies in an attempt to neutralize this ‘threat’. The problem is that in certain populations where the genetic susceptibility exists, those antibodies, having a similar structure to some of our body’s own tissues will now go and attack various systems throughout the body. The thyroid in Hashimoto’s hypothyroidism, the myelin sheath in Multiple Sclerosis, the joint capsule in Rheumatoid Arthritis, the colon in Crohn’s Disease, The liver in Autoimmune Hepatitis….the list goes on. From a naturopath’s point of view, it matters less how it manifests and more that it’s autoimmune in nature.

There are several ways by which permeability in the gut arises. In children, one of the more common ways is through foods. At birth and by design, babies are born with several gaps in the tissue lining the intestines as this is how babies absorb proteins and fat from mom’s breast milk. As the baby grows and their intestines mature they can gradually begin to tolerate different foods provided that the food matches their capacity to digest it. In many cases, however, foods – often allergenic foods – get introduced too early, are recognized as ‘foreign’ and the above process of antibody production begins. In Katie’s case, it wasn’t so easy to pinpoint possible food sensitivities given that gluten, a common allergen wasn’t introduced until 8 months of age and dairy wasn’t introduced until 12 months of age. She did not present with any significant digestive concerns although she did manifest eczema, a classic sign of ‘leaky gut’. This, despite the parents, has done all the right things.

We discussed the possibility of starting a hypoallergenic diet prefaced by a Food Sensitivity test for what’s called an IgG response (or ‘delayed’ immune response) to 96 different foods. This, in addition, a small number of supplements to help heal the gut and modulate the immune response. They did the test and began the dairy, soy, corn, egg, gluten, and sugar-free diet in earnest. What they noticed initially was that the swelling was on its way down. However, Katie was also still taking Naproxen so it was difficult to tell what was helping. When the results came back it allowed Katie’s family to further refine her diet. As it turned out grapes and citrus were high on the list as were the foods she was already avoiding. Remarkably, her eczema disappeared indicating to her mother that her gut was indeed permeable and in the process of healing. Another significant development was that Katie was able to have a fever during a cold without aggravating her joint symptoms, something that previously went hand in hand. Slowly but surely the swelling was going down and her range of motion was improving. Finally, to do away with the residual inflammation, Katie’s parents opted to proceed with the cortisone shots allowing for a full recovery of her range of motion. To date, Katie is now in complete remission, off the Naproxen, bouncing off the walls and threating to flush her mother`s watch down the toilet. There have not been any further flare-ups in her joints or skin, she is sleeping better, has more energy and is fearless in her exploits.

This story has a tremendous ending. It’s a testament to what children can endure and how well and completely they can heal once the true cause has been found. These parents have literally changed the trajectory of their daughter’s life. I feel so fortunate to have participated in this family`s journey and witness our body`s innate wisdom and the healing power of nature. Thank you, Katie!