Breastmilk is widely acknowledged as being the most complete form of nutrition for infants. Beyond the perfect combination of proteins, fats, carbohydrates, and nutrition that change continuously according to the needs of a growing baby – it is responsible for several significant outcomes regarding immune function. In infancy these will manifest as:

Later in life, the immunological benefits of breastfeeding for 6 months or more are associated with:

While conventional wisdom attributed the majority of these effects to the various compounds present within human breastmilk, namely immunoglobulins (antibodies derived mainly from maternal gut and lungs), lactoferrin (inhibits growth of bacteria, viruses and fungi) and lysozymes (directly toxic to pathogenic organisms), little thought was given as to whether or not commensal (symbiotic) or beneficial bacteria could be a factor since breastmilk was thought of as sterile. However, in 2003, a Spanish study published in the Journal of Pediatrics revealed breastmilk to be a major source of lactic acid bacteria for the infant gut. Beyond the vital exposure to commensal/beneficial bacteria that babies receive as a result of a vaginal birth (vagina/rectum/skin), it appears that babies consume as much as 100,000 to 10 million bacteria daily (based on an average consumption of 26 ounces daily).  This is hardly surprising given that non-human micro-organisms greatly outnumber our own cells; three to one by some estimates. 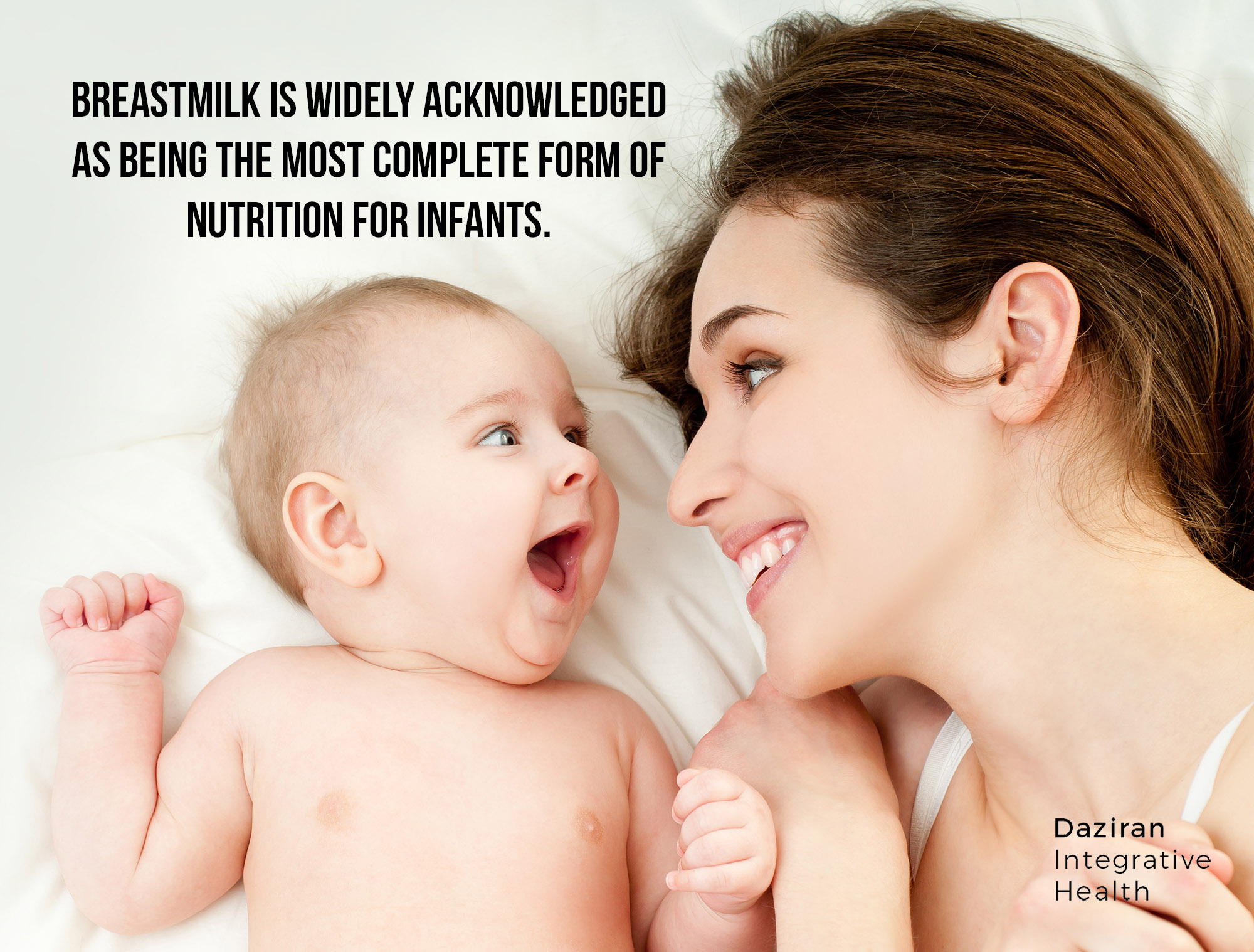 If one were to take a cursory look at the available research on the benefits of probiotics, they would likely find a striking similarity between their supplementation and the effects observed above among many others. Yet while the research shows that breastfeeding and probiotics (and even probiotics during pregnancy) reduce the likelihood of developing the conditions listed above, to date, research linking the two variables is sparse. This is presumably due to the fact that up until recently, researchers had yet to explain how something residing solely on the so-called external environments of our body (gut, lungs, genitals, oral, skin), made their way into breastmilk.

What the research suggests is something of a pathway that exists between the maternal gut and mammary glands via the immune system. Firstly, white blood cells that normally serve a ‘Pac Man’-like function (engulf and destroy foreign material) alter their activity and instead ‘sip’ the environment of the maternal gut, take samples of the resident bacteria, travel through the bloodstream, and deposit their contents in the mammary glands. Indeed, small numbers of bacteria can reside inside these cells for several days prior to reaching their destination. Changes to maternal physiology, specifically, weakness in the gut wall, increased permeability of the gut wall, and decreased motility allow for this incredible process starting in the third trimester and continues up until the point of weaning. Once these bacteria reach the infant gut, there are literally no barriers to colonization. It’s warm and moist with an endless supply of food- the complex sugars of the mother’s breastmilk.

So what are the implications of this profound relationship between mother and baby? It’s important to realize that the first month of breastfeeding is a critical period for establishing the bacterial profile of the infant gut. Samples taken from eight and nine year olds show that the streptococcus and staphylococcus profiles established within the first month of life remain intact. This finding lends new insight to the negative impact that antibiotic use, modern diets, and stress have on the maternal microbiome and the potential for chronic disease in children. Given what we know of the benefits of probiotics and that breastfeeding is a principle source of beneficial bacteria for the newborn, the utmost care must be taken to protect this sensitive and diverse ecosystem. As naturopaths, we often talk about the healing power of nature. While conception, pregnancy, and birth aren’t necessarily conditions that require healing, this is just one more example of how the wisdom of Mother Nature manifests to ensure that we are able to survive the environment we’re born into.